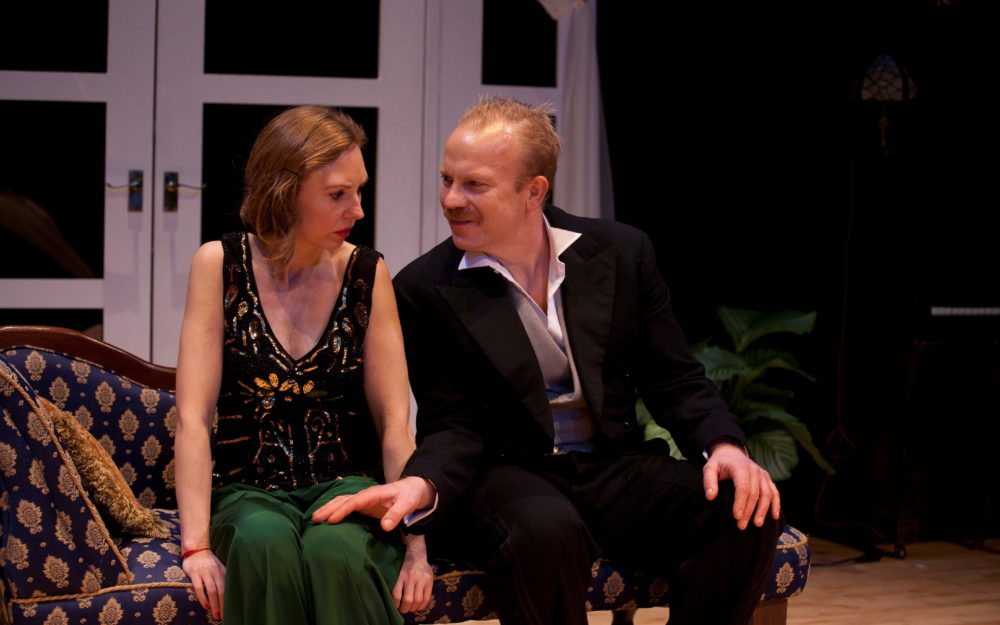 Bored housewives are a 20th Century invention – right? Wrong. Mrs. Jorgen Tesman, aka Hedda Gabler, was created by Norwegian playwright, Henrik Ibsen, in 1891; and she’s one mother of a bored housewife.

It is interesting and perhaps ironic that Ibsen chooses the maiden name of his lead character, when he clearly portrays her as a married woman. It’s also, rather amusingly, difficult to believe that this is not a true story.

Obviously we know, Ibsen is a genius, and that his Hedda is a complex, challenging character that you need experience and maybe even a degree in psychiatry before you could even think about producing such a thing. So, when I heard that the Castle Players innovative New Director Initiative had selected a proposal from Libby Harding to produce and direct Hedda Gabler – I thought they’d all gone mad! But I loved it and I am forced to eat Aunt Juliana’s hat – loved Heather Armstrong’s sugary Aunt Juliana – she is so sweet and gentle and she has no idea that Hedda regards her with such absolute contempt.

The play was born in the late 19th century; Harding chose the decadent 1920’s for her interpretation. She kept it simple with a lovely white conservatory door made by Ben and Rob Pearson; simple well-used furniture and an effective vibrant oil painting done especially for the play, by Castle Players stalwart, Charlotte Perkins.

Everyone has worked so hard on their characters making them all the more believable. Isobel Harvey lends a confident silence to Berta, the long suffering maid. Cal Baker’s Tesman is an over-the-top Buffoon with academic intelligence, and he perfectly demonstrates a total lack of husband skills. Oliver Smith gives us the intense, cad-about-town idealist, Eilert Lovborg, Tesman’s academic rival, and former flame of Hedda. He is, like Hedda herself, not well adapted to modern life, and unable to control himself. We see that he’s still in love with Hedda and his well-acted performance is a pleasure to watch; I particularly liked his drunken portrayal when his character falls off the wagon.

Phoebe Lorenz as Thea, Lovborg’s assistant and muse, is clearly afraid of Hedda and her relationship with Lovborg inflames Hedda’s jealousy. Lorenz shows the confidence necessary to make the most of her bullied character.

Judge Brack watches everything like a hawk, he’s not quite as influential as he’d like and also in love with Hedda. Ben Pearson gifts Brack a rather nice sense of humour.

So, the best is always left until the last, and Susannah Handley’s Hedda is by far the very best. I liked her, hated her, felt sorry for her; I wanted to smack her and yet I admired her strength and her mischievous nature. Handley carries this production with skilful acting, inhabiting one of the most difficult and complex characters in theatrical history, with such aplomb. The little nuances of absolute boredom become amusing as she rolls her eyes at Aunt Juliana and pushes away Judge Brack’s advances with a single finger. She flutters her eyelashes at Lovborg, threatens to burn Thea’s hair and treats the maid, Berta, with utter disrespect. Handley is deliciously mischievous and manipulative as she tries to persuade the reformed alcoholic Lovborg to drink and to make his death ‘beautiful’. Handley basically and impressively ‘nailed it’!

I enjoyed every minute – loved the costumes, courtesy of Lesley Cutting and Vaughan Freeman’s lighting and sound was excellent. The whole production is one of those things that is greater than its parts – the parts being played so brilliantly.

Well done Libby Harding, as a directing debut, you’ve made something quite memorable.