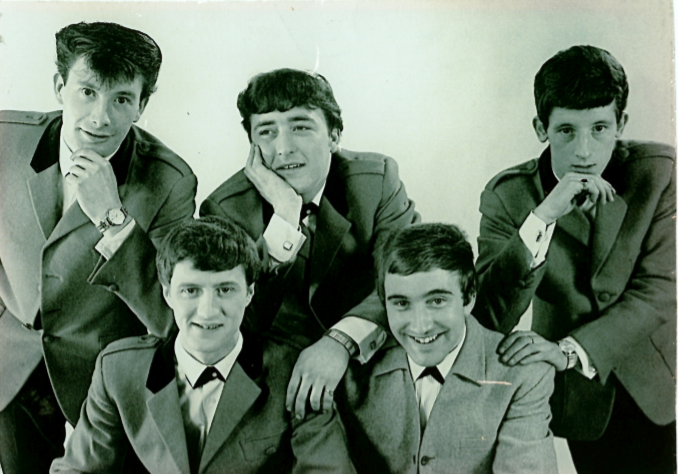 The Witham’s Sarah Gent spoke with Barrie Miller about his time at The Witham in the 1960s playing with his band, The Zephers (pictured above: Left to right: Alan Coverdale, Dennis Coleman, Barrie Miller, Tony Martin and Tommy Harbron as part of the Southern Border Dance Circuit. One of Barrie’s photos is on display as part of the Pills, Thrills & Skills exhibition.

The Zephers formed when I was sixteen and a half, back in 1959 with three of the five members from the same secondary modern – Bailey Street in Stockton, which closed down years ago. Our members included Alan Coverdale, Dennis Coleman, Barrie Miller, Tony Martin and Tommy Harbron.

Our manager Jo Postgate from Reeth contacted us in 1961 to ask if we’d join the South Border Dance Circuit along with bands such as the All Stars. We played across several venues including The Witham Hall on Saturday nights a lot.

I’ve got such fond memories of this place – the music hall hasn’t changed a bit apart from the seating and lighting rig. It’s got the same great vibe that we loved back in the 1960s. Back then, we’d arrive at 6pm to set up and then head over to The Red Lion for a few before the gig. There wasn’t a café bar here then, just a corridor that ran uphill into the hall.

We were keen to head over to Germany, like a lot of young bands did in the 60’s but our manager encouraged us to stay and do apprenticeships. I did and become a Jaguar Technician. It was a good job but I always wonder what might had happened if we’d gone on tour like so many others who did.

It was very nostalgic for me to stand on the stage where I played many times during the 60’s – it was the beginning of a successful time for The Zephyrs, great privileges to play with Bernard Herman & the Northern Dance Orchestra, Dusty Springfield, The Animals, Gene Vincent, Zoot Money & the big roll band, Gino Washington, Marty Wild, Chris Fender Black, Billy J Kramer & the Dakotas and many more!!

I left Witham today with a lump in my throat !!

Best wishes for your exhibition & the future.